This tibril is a tea pitcher (used here before thermoses).  You put coals in the bottom vessel and nest the tibril in there to keep the tea hot.  The dragons?  Unbelievable work.

Tsering Jigmet is the name of the current sergar (metalworker) and father of the household.  We made a beautiful connection: I heard from him about what changes are happening in the village, many themes familiar to me from living in Tar.  Their herd is the last sizable one of the six village households.  And I spoke about why we're here and what I find so beautiful and valuable about the traditional life of Ladakh.  And what we've lost so much of in the industrialized world.  I got to watch him craft brass spoons by hand.  With a cold chisel, he crafted leaf patterns onto the handles, and then with great deftness hammered their bowls into beautiful curves.  His son has worked with him, and travelled and studied abroad, and now he has returned and chosen to take up the metalwork from his father so that the name of Chilling, famed for centuries for its metalwork, will not pass into the history books.

They say they would love to have a rardzi (shepherd) for the summers, someone who works hard and cares about their culture and language.  They didn't ask for any money for the homestay when I left, and I sang some Ladakhi folk songs for them and exchanged contact information with them and said that if there's anything they need in the future that we can help with, let us know.  I feel so content, knowing that his son will take up the work and the life in the village.
Posted by Jason at 12:05 PM No comments:

A Letter for Peace 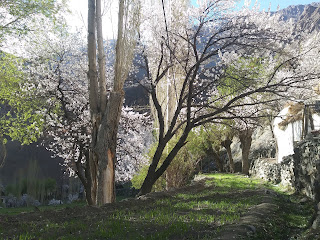 I am a woman who lives now in a desert village made abundant by thousands of years of human hands' joined effort.  The work of peace is not an easy work -- heavy weight of water and soil, harvest, children bourne.  Heavier work to ask life, bowing, from one's own place, than to take it by force from somewhere else.

A village is a particular and living being, made of the lives that fill it, and their weaving. Made of the weaving of a people into a land, and the labors that offer the space to thrive.  From the vantage of this village it is easier to imagine the life of another village: where women also carry water, where men also climb into trees to cut wood.  Where children also pull down green apricots to gnaw their hard, sour bodies and then toss them to stray dogs.  A Syrian village, that has been destroyed.  An Iranian village that could cease to exist.

I am a white-skinned woman born in the occupied indigenous territory now called the United States of America.  I live now in this place of great, dry mountains mostly for love of its water and the many works that make its life.  I live here, also, because the fruits of the American imperial project are bitter to me.  I would free my life from them to the extent that I can, though I do not imagine myself for a moment to be uncomplicit.

It is late spring.  The fields are green now with young barley.  Columbines bloom in the rocks, and dry, wild roses.  Sometimes when I blink, in the dark moment of closed eyes I see bombs falling, here.  I see the places where houses stand above their fields becoming wreckage, see the walls and canals carefully repaired each year for fifty generations become rubble.  I see the grandmothers I love -- whose knees hurt, who miss their grandchildren in the city, who tend beautiful gardens -- looking up at the sound of plane flight to be made blind by explosions of fire.  These are not empty imaginings.  This has happened how many times?  On beautiful spring mornings in Vietnam, Guatemala, Afghanistan, Iraq, Syria, Yemen.  It could happen now, soon, in Iran.

Today I am peeling willow poles in the forest of the upper village, the shout of the glacial stream so complete that it becomes a silence.  Because it is late spring; because this is the necessary work of these days, between the first and second waterings of the fields.  Because this is the truest way that I know how to pray against the terror of bombs falling -- on this forest, or any forest -- on these precious orchards and fields, or on precious Iranian orchards and fields. 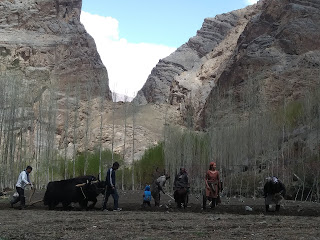 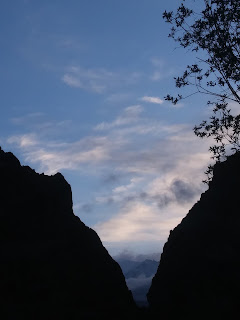 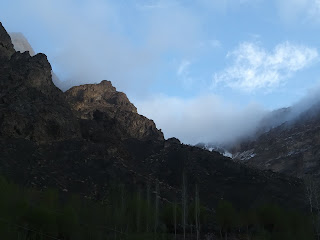 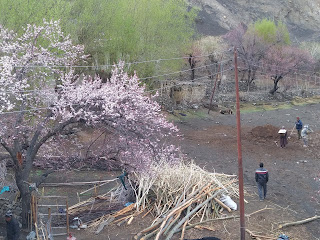 We want to write more about manure.  It's so important to life.  For now, here is a shot of the early morning work getting going on an April plowing day.  The fields are flooded before manure is spread, so that it doesn't wash away -- so most plowing mornings start at first light with the whole village gathering to shovel into baskets and carry and dump, manure spread by Abis with shovels and turned in with the seed.

Please see a post last year from Caitlin on watering (with new photos), the work that is happening right now in Tar....

For the last twenty days I have been seizing hold of the plow by its wooden handle, stepping up all my weight upon the metal plowshare at the field edge as the dzo team pulls it forward.  The share bites maybe two hand's breadth deep into winter-packed earth, and I work its tall wooden shol, now bent over, now holding upright, all just to catch the next eight or twelve inches of unbroken earth and see it lift deep brown and break open like a wave.


This is called tong tangches (giving the plow), and whoever plays this role also sings praise to the dzo.  The other tool of motivation is held in the offhand, a freshly cut smoothly green-barked willow switch.  Some guys who plow (it's men only) use the switch and barely sing.  Others give delightful song and even can plow singing at a jog behind the team.  On big days it's good to have them at the helm.  I'm slower than that, and I'm told I have a light hand.  Plowing slowly and carefully means less breaking -- you get caught under a giant alfalfa root and break the tong chung, a small specially-carved piece of willow wood that connects the plowshare and the shol, a part of the system designed to be the weak link that breaks and is easily replaced.


I find I can use voice and body language and I only rarely need the lash.  It's still often fear that's motivating them, though, and in my heart I would like that to be different.  any people have been feeding me delicious words of need and praise for me to feed in turn to the dzo as we plow, burying the seed and manure to bring forth the barley once again.

Tse-bo-ring shik
a long life to you 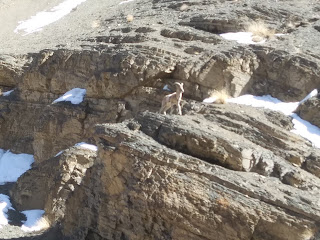 We are searching for someone who loves walking in mountains to carry the shepherd work through this summer in Tar village in Ladakh. This is something that people in the village consistently identify as a need, and specifically they approve of the idea of a friend or acquaintance of ours coming to fulfill this role for a time.

If you or someone you know would seriously consider it, living with folks here, eating wholesome food from this land, bringing bundles of wild fodder back all summer for winter storage, please be in touch with us. The best time to come would be before June so we can overlap with you, and we would need you to stay for at least two or three months. 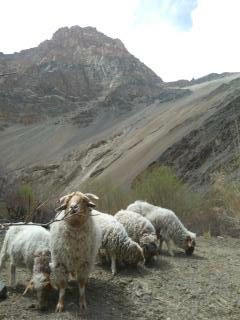 Lots to learn, an amazing place to explore.  Homestays are available for less than the price of a hostel, with skillful and willing teachers in the crafts of the village.  If you come before June, we can get you started on language.  Plenty of flexibility to this job, but a serious commitment is needed, spending most days taking the herd from the village and tending them in the mountains and high pastures where they graze.  The village is at around 11,000 ft (3230 meters) elevation.

The slopes are steep and the footing is challenging.  The days are not terribly long, but it will take time for anyone's body to transition to this altitude.  Expect camping conditions and amenities -- the village is not on any road.  Living here is inexpensive compared to the US, and if expenses for the flight, passport, and visa are a limiting factor we can certainly find the needed funds among our networks.  India is newly offering a one-year e-visa which makes that process much faster and easier.

We're delighted at the idea of introducing someone new to our friends, these amazing people in the village. If you have a serious interest please comment here or find me as "Jason M Chandler" on facebook.

Please see the last two blog posts (Ice Melting and Returning) and the rest of the blog for more context and the reasons we make this ask. 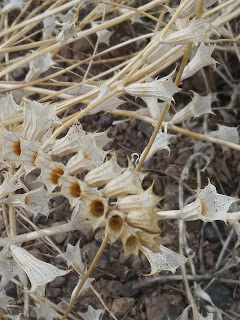 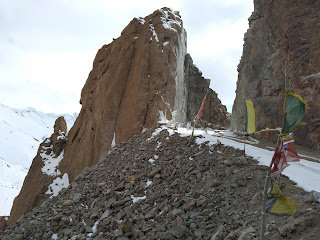 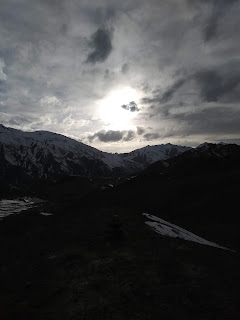 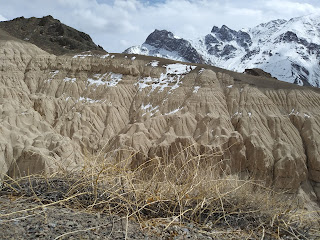 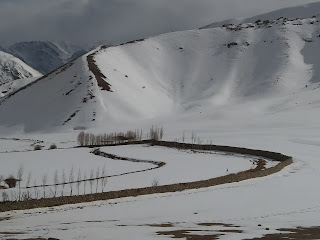 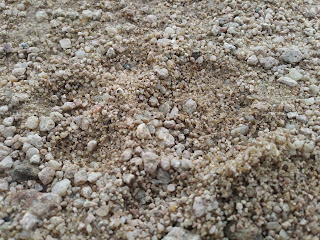 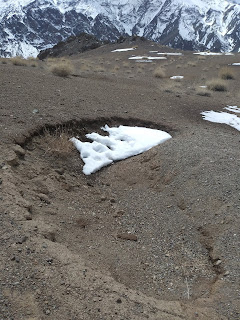 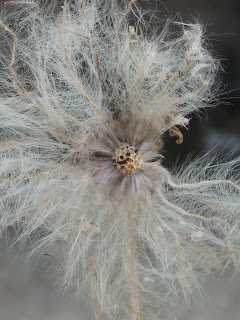 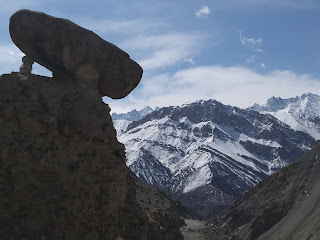 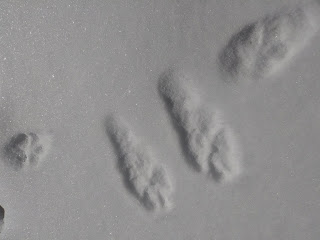 Donate to the Journey Here

Ladakhis: village-rooted people of the vast Himalaya, who have raised families and built soil for thousands of years on glacial melt, in a land where each year only four inches of water fall from the sky. Most Ladakhis are Tibetan Buddhist or Muslim. Paved roads have been built only in the last fifty years, and the passes still close for about six months each winter. The sun is hot, and the nights are cold. Roasted barley flour, wheat bread, vegetables, noodle soup, butter tea, meat, and apricots are standard fare.
Caitlin & Jason: we are white middle class US citizens who recognize the disastrous folly of American economic imperialism and feel great joy in working with people of real resilient cultures still deeply rooted in land. We feel deep desire to know the plants and to learn how to draw food, shelter, and clothing directly from the land. Even while we seek nourishing ways of living, we participate in and benefit from systems of white supremacy in the United States and abroad, and we seek to challenge those unjust systems and dismantle them in every way we can. We come to Ladakh to live and work and learn language and song with a highly skillful community of farmers and a web of youth and educators centered around SECMOL. We feel like family here, and we find in our relationships with the people of Tar a great source of inspiration. We are always reexamining how our lives interweave between here and the lands and people where we were born and raised in occupied chkuwabonakik, "the land where the sun's rays first look our way," in Maine in northern New England.
We long for a lived understanding of humans as part of the natural world, reciprocal, responsible, and striving for justice while cognizant of past and present lived understandings of racism and injustice. We see practices of meditation and mindfulness as central tools for bringing about meaningful, long-lasting change in the world. We love simple good food, the exquisite beauty we find each day in observing other living beings, music, and making our own tools, clothes, and gear. We strive to live mindful of our ancestors, awake to the reality of what we do today, and mindful of the consequences of our actions on lives of many generations to come.